Motorcycles ridden in the MotoGP World Championships are special; the general public can't buy them and they can't be used on a public road. As prototype racing bikes they are custom-built to outdo their rivals and maximise performance on the track.

Moto2, the second of the three MotoGP classes, was created in 2010. Its official engine is a 600cc four-stroke production engine, currently supplied by Honda. The French Moto2 team TransFIORmers, based in Perigueux, South West France, is revolutionising front suspension design in order to stay ahead of the pack.

Boudinot's former friend and mentor, Fior, recognised the gains to be made from isolating the front suspension from steering forces. Resolving issues of ‘brake dive', the design enables later braking into a corner and faster acceleration out.

To further advance the development of its innovative design, TransFIORmers approached I3D Concept, a world-class expert in metal additive design and manufacturing techniques.

Using Renishaw's AM250 additive manufacturing system, I3D Concept worked in partnership with the TransFIORmers team to optimise the design of its upper wishbone component, one of two attaching the front fork to the chassis and critical to the bike's steering.

In the development of new components in Moto2 bike design, achieving a weight reduction is a priority. In particular, reducing the ‘unsprung mass' of the bike is a key consideration. The lower the unsprung mass, the better the suspension is in terms of vibration (chattering) management and responsiveness to both braking and acceleration.

Of equal importance is the speed with which the design of a new component can be modified, and how long it takes to remanufacture. Achieving perfection in a highly competitive environment demands fast and accurate component iteration.

“To improve overall motorcycle performance, reducing the weight of all components located behind the shock absorbers is absolutely vital. Failure to optimise component weights can have an adverse effect on vibration, braking and acceleration, so weight reduction is a really high priority,” says Jérôme Aldeguer, Mechanical Engineer, TransFIORmers.

The weight reduction that metal 3D printing has achieved for us in our wishbone component has enabled us to bypass traditional weight transfer phenomenon and the problems associated with ‘brake dive'. More than that, it's allowed us to design a part that is not only lighter, but far more rigid at the same time.

Key to the new 3D component design was an iterative process of topological optimisation, whereby the wishbone layout was successively rationalised in software within tight space constraints to withstand a set of predefined front fork loading conditions. 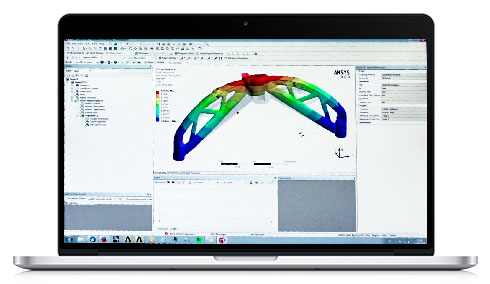 Once the final component design was validated using digital CAD software, the build preparation file was prepared offline prior to export to the additive manufacturing system.

Within the CAD software, I3D Concept was able to assess whether the parameters were effectively predetermined or whether they required tweaking to match the specific metal powder characteristics and the complex target geometries of the TransFIORmers wishbone.

By taking an additive manufacturing approach to Moto2 bike design, TransFIORmers succeeded in dramatically reducing the weight of its critical wishbone front suspension component by a factor of 40%. Comparing the one-piece titanium component with the original welded steel component, a weight saving of 600 g was achieved.

Metal 3D printing has also provided TransFIORmers with much finer control over component tolerances and the flexibility to very quickly iterate wishbone geometries to match specific chassis and kinematic requirements.

“The weight reduction that metal 3D printing has achieved for us in our wishbone component has enabled us to bypass traditional weight transfer phenomenon and the problems associated with ‘brake dive'. More than that, it's allowed us to design a part that is not only lighter, but far more rigid at the same time,” explains Jérôme Aldeguer, Mechanical Engineer, TransFIORmers.

With an ultimate tensile strength in excess of 1100 MPa when processed using additive manufacturing, and near perfect 99.7% densities, the titanium Ti6AI4V alloy used has delivered a radical new wishbone offering far greater rigidity than the original multi-part, hand-assembled steel component.

Thanks to additive manufacturing, TransFIORmers' prototype wishbone development has become a highly efficient and cost effective process. Extensive part machining and assembly time overheads have been removed and design iterations and manufacturing have been made many times faster.

In June 2016 the team won its first ever Moto2 GP race at the FIM CEV European Championship event in Barcelona.