Renishaw, the global engineering company with its headquarters in the west of England, has been named as Gloucestershire's STEM Company of the Year.

Renishaw, the global engineering company with its headquarters in the west of England, has been named as Gloucestershire's STEM Company of the Year. The award which recognises the company's work to enthuse students about Science, Technology, Engineering and Mathematics (STEM) was presented on 17th October at a special STEM Ambassadors' Reception held at Gloucester City Museum and Art Gallery.

The award citation referenced Renishaw's extensive work with fifteen local secondary schools where it sponsors STEM award programmes, its sponsorship of a mobile laboratory which takes science resources to primary schools, plus its initiative to train 28 young Renishaw employees to become STEM Ambassadors that will work with and inspire young students.

With a national shortage of high calibre engineers Renishaw is fully committed to supporting the future of the UK engineering sector, and has well established apprenticeship, sponsored student and industrial placement schemes. In 2013 the company recruited a record 40 apprentices and 54 graduates, and now has 110 apprentices in training. 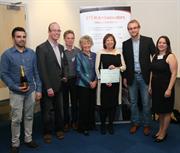 Speaking about the award, Julie Collins, Renishaw's Education Liaison Executive said, “Being named Gloucestershire STEM Company of the Year is wonderful recognition of the hard work of our STEM Ambassadors, the strong relationships that we have developed with local schools, and the many projects that we sponsor across the region.”

She added, “Helping children to enjoy STEM subjects at school is the best way to encourage them to study engineering at universities or to consider an engineering apprenticeship. The work of company and individual STEM Ambassadors, is therefore vital to the future of the UK engineering sector.”